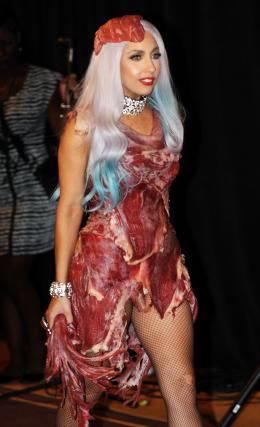 Gaga - used to meat swinging between her legs

Lady Gaga has caused outcry after wearing a dress made from meat to the VMAs. This isn’t the first time Gaga has been in the news due to surprising meat. I object to her attire on two fronts, neither of which are anything to do with animal welfare. 1) That meat looks tasty – I could’ve had that. 2) Some poor sod had to sit next to her, smelling like road kill. PETA have come out and condemned her fashion. It’s noticeable that they said fuck all about Cher and her monstrous leather boots (see the pic in the linked Guardian article). Why not? Because Cher is completely irrelevant when placed next to Gaga, the very modern media icon. PETA’s objections to the dress are pretty baseless – they’re just after the cheap publicity. Not that needless butchery of animals is right. But this is just a stunt taken way too seriously. Storm in a meat purse? I think so.

You heard it here first:

Papal visit and such

Here comes the Pope. He should really go home. The visit is costing the UK upto £20m in security costs and so on. That’s a years wages for 100 squaddies, teaching assistants, carers. It’s a waste. Plus the Pope has pretty archaic views on abortion, contraception, and homosexuality. Then there’s that key tenet of Catholicism – ‘thou shalt be allowed to fuck a child and get away with it, particularly if it happened in the 70s and you’re a bit old now’. The Catholic church has covered up endemic child abuse, and over half of the priests who have served a year or more for paedophilic crimes since 2001 still enjoy the benefits of priesthood. Can you think of any other organisation that deals with children and would cover up their harm so exhaustively? The visit is causing more hassle than it needs to, and is an insult to all those who have been harmed by the clergy. Maybe when the abuse has been comprehensively dealt with, and he brings his views to the present times, then we should welcome the Pope. But not now, IMHO.

There is only one good thing about this visit – the Pope looks like a gay cowboy:

Brokeback 2 had found it's replacement for the late Heath Ledger

On your head love