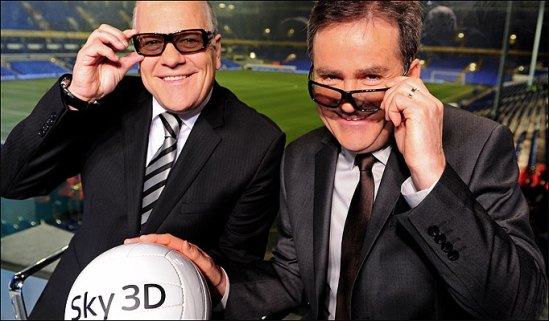 ... or Hitler and Fritzl

In a shitstorm reminiscent of Sachsgate, Keys and Gray’s days were numbered as soon as footage emerged of them poking sexist fun at Sian Massey, a female assistant referee. More footage has since emerged, which is also in poor taste. But what they said would have been said verbatim across the country by thousands of male football fans. This is not right, but it is true. Having women like Massey in the game will help to change these attitudes, but it is a male-dominated environment and this will take time. It has been forgotten, or just ignored, that Keys, Gray, and the rest of the commentary team wished Massey luck before the match, acknowledging the unusualness of the situation. At half-time, they responded to the brilliant decision Massey made by congratulating her, as I have seen them do on umpteen occasions with male officials.

Both Keys and Gray are part of an older guard of football. Gray made his debut for Dundee in 1973 – a year later, the James Bond film The Man With The Golden Gun was released. Bond was hugely sexist at this time, and his love interest was crudely named Mary Goodnight. This is the world Gray grew up in. Whilst what they did was wrong, it was not born out of malice. It comes as a result of ingrained views. Football has changed unimaginably since Gray played. Even in the 90s, Manchester United had so-called ‘Captain’s Days’ – whole afternoons spent in the pub. Times change, but it can take time for individuals to catch up, and often they get left behind. Therefore you can only truly condemn behaviour like Keys and Gray’s when it is stood by, but both men have since apologised, and shown a willingness to change.

What annoys me is the rank hypocrisy of Sky, our media and society in general. On Sky Sports, you would not see Clare Balding. Georgie Thompson, Kirsty Gallacher, Helen Chamberlain et al are beautiful women. They may well be highly qualified and knowledgeable about sport, but I’m sure the lads-mag looks never held them back. One of Sky’s most popular programs is Soccer AM, with the regular feature Soccerette. The Soccerette wears a football shirt, not much else, and bounces around on a trampoline. All in aid of women’s rights, obviously. The Sun today highlighted one of Andy Gray’s other indiscretions today on their website thus – Gray’s perving over TV girl. This from the same paper that has, on page 3 every day, a semi-naked young woman. A cheap wank to perv over. The Sun and the News Of The World are owned by Rupert Murdoch, who is the major shareholder of Sky. Gray is suing the News Of The World over phone hacking – has Murdoch had his revenge?

And again, what they said was sexist and wrong. But sexism lives and is rife today. Loose Women is an enormously popular TV show – I doubt very much that they always offer a balanced opinion of the sexes (although I can’t offer an informed view on that – I’m more likely to be found giving a polar bear head than watching that tripe). There is a car insurance company, Sheila’s Wheels, that is exclusively for women. Surely that is sexist too?

What would I have done? Suspend Keys and Gray for a month, donating their pay to a women’s charity. Make them apologise fully. If they refused, fire them before their feet touched the floor. I don’t think they needed to lose their jobs. They were both good at those jobs, and had been the faces of Sky Sports for nearly 20 years as a result. But you can’t slip anymore. And so they have been vilified in public. Drink drivers, like footballer Lee Hughes, can go to prison after killing someone, and return to their former careers instantly upon release. Neither Keys nor Gray have committed a crime – will they be afforded the same opportunity? I very much doubt it. For them, there will be no rehabilitation. That is as wrong as sexism. But it is the Britain we’ve created. We love nothing more than watching celebrities trip up and kicking them to pieces when they hit the floor, all documented by an increasingly tabloid, hysteria-fuelled media. Let me reiterate – what Keys and Gray did was wrong. But the reaction was not right either.

It’s really very good. Natalie Portman performed a lot of the dancing herself, and the psychological aspect makes it different and far more interesting as a film. So go see it: 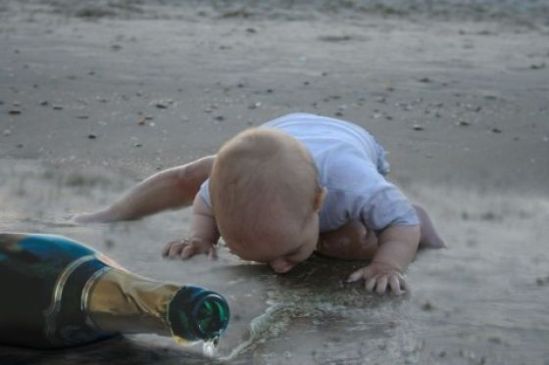 -Edinburgh is going to rule.

Right, this is fucking brilliant: Via Dave, my main man, Yo La Tengo:

Who cares if you can’t tell the words. Awesome.

… but that’s not the point 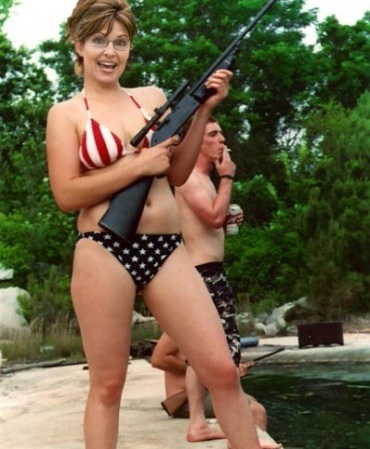 Sarah Palin has been defending herself again in the wake of the Tucson shootings. Appearing on Fox News (home ground), she very quickly invoked Biblical verse, and sought to paint the shooter, Jared Lee Loughner, as apolitical or even left-leaning. It’s no surprise that presenter Sean Hannity played completely into Palin’s hands – she is, after all, a paid Fox analyst. However, while she is right (for once) to say that she is not to blame for the murders that occurred, that’s really not the issue. The rhetoric used by Palin, Glenn Beck, and other rightwing commentators is violent. Palin used crosshairs on maps on her website – her defence of this was “It’s been done before”. That’s no defence! And Beck is no better. In trying to show how anti-violence he supposedly, he only succeeded in making himself look like a raging hypocrite: 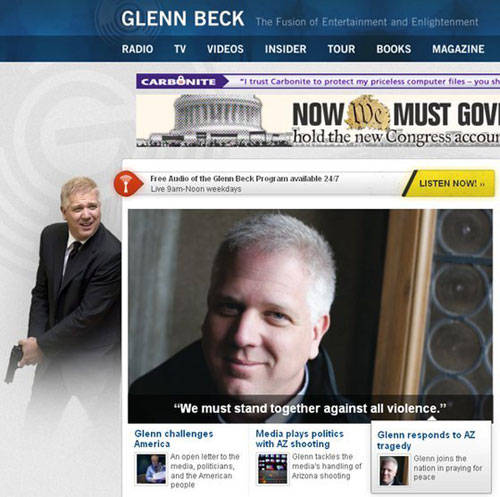 Yes, resist violence, with a Glock 9mm. Brilliant.We all know you didn’t kill anyone Sarah. But violence breeds violence. Whether it’s language or actions, it’s not right. Can it douchebag.

A gay couple have been awarded £1800 each after being refused a double room in a hotel in Cornwall. The case boiled down to religion vs sexuality. The hoteliers refused Martyn Hall and Steven Preddy their room on the grounds that, in their eyes, they weren’t married. They also refuse double rooms to unmarried straight couples. However, Hall and Preddy are in a civil partnership. All they want is to have the same respect offered to them as a straight married couple. They aren’t deviants – they’re people. I don’t see what religious people find so offensive. After all, straight people bum too.

Richard Bacon made a very astute point on this subject t’other day:

This is very, very special:

I told you to be patient.

FA, get over yourself 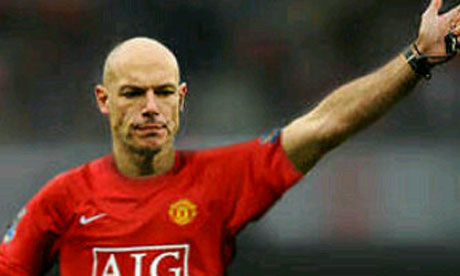 Ryan Babel, Liverpool’s serial bench-warmer, has been charged with improper conduct by the FA after posting the picture above on Twitter. Babel was unhappy with a decision to award a penalty ,made during his team’s FA Cup tie with Manchester United. The decision was wrong, it was terrible. And the pious FA deems the above picture enough to bring a charge forward for him to answer. It’s not even like he made this picture – as his manager Kenny Dalglish said, “he’s probably not clever enough”. Now, I accept that referees deserve respect. But the picture is puerile, poorly made, and inoffensive. Does reposting something vaguely funny really merit action? Compare it to, say, his manager’s comments – “the penalty was a joke”. Just chill out FA, have a sense of humour. You aren’t the cussing Vatican, stop acting like you are.

I went to a really cool short film evening Saturday past. Here is one of the best. Superbly heartwarming. Click through and watch, I implore you.

Congresswoman Giffords is critically ill in hospital. 6 people died in an attack on her, and she has had half of her brain removed to ensure she survives the brain swelling. Sarah Palin had a map on her website showing vulnerable seats, using crosshairs to pinpoint them. Giffords has spoken out against this kind of imagery, almost predicting her own fate – “when people do that, they have got to realise there are consequences to that action”. Palin may not have asked anyone to shoot Giffords, or any of the other 19 Democrats on her hitlist. But she didn’t need to, as to a mad mind, the imagery alone could be enough of a spark to violence. Here’s hoping Giffords recovers her life to some sense of normality. Here’s hoping Palin tones down the deathly metaphors. And here’s Keith Olbermann’s take on the responsibilities of politicians and the media alike. Spot on:

Why sport is great

-Brooker – “complaining about the lack of realism in EastEnders is almost on a par with threatening to sue the manufacturers of Monster Munch because their crisps don’t taste of monsters“.

And all I got is time until the end of time. 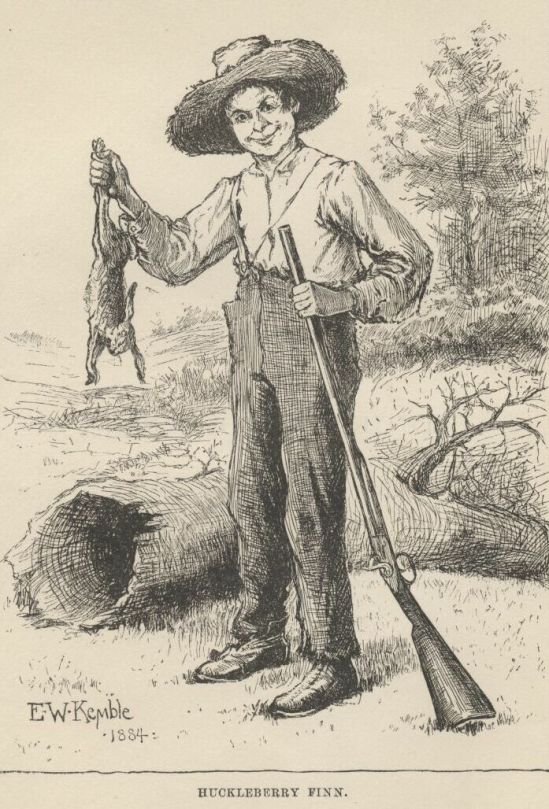 "What a load of hokum"

A new US edition of Huckleberry Finn is being released without the word nigger. I will not write n-word – nigger is, after all, only a word. The connotations associated with it elevate it, and any time it is delivered with hatred, the perpetrator should be condemned. However, it does not need to be censored. Any rational, moral person with see that to call someone nigger is ignorant and abhorrent. However, Twain was an ardent anti-racist and was using the term  to demonstrate and denounce the prejudicial attitudes that were endemic in America at the time. What makes the censorship even more ridiculous is that nigger has been replaced with slave. At the time, nigger was a pretty generic term for a black person. By implication, the replacement of nigger with slave means that all blacks at the time were slaves, which is false and possibly more offensive than the term nigger was in the first place. What is more, Huckleberry Finn is a historical document, not a guide to life in the 21st century. We know the word nigger is disgusting. But if I can read the bible and not attempt to walk on water, I’m sure I can enjoy Huck and not become a massive racist.

Now, this has gone around the world, but this guy really has an incredible voice. I love it when it unexpectedly breaks out mid-sentence:

I love, love, LOVE sushi. Yo! is pretty much my favourite restaurant at the mo – hairy prawns are awesome. But £254,000 for one fish?! That is officially insane. It’s just a tuna! I remember hearing that mark-up on food in restaurants is usually 400%, meaning this one fish will generate a cool £1m in sushi. I love the Japanese but they are bonkers. 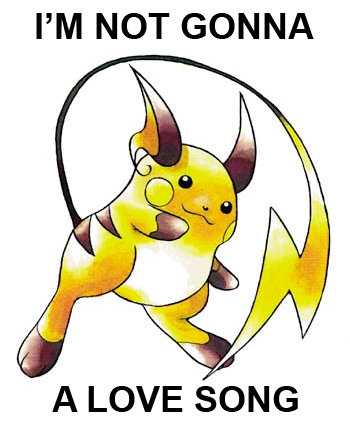 –WE’RE ALL GOING TO DIE!

-I want to be Don Draper. After one episode.

You know it’ll be alright.